Q. Isn’t smoking marijuana less dangerous than smoking cigarettes?
A. No, it’s even worse. Five joints a day can be as harmful as 20 cigarettes a day. (Tips for Teens: SAMSHA.GOV)

Q. Can people become addicted to marijuana?
A. Yes. Research confirms you can become hooked on marijuana. In 2012, 957,000 people received treatment to kick their marijuana habit. (Tips for Teens: SAMSHA.GOV)

Q. Can marijuana be used as medicine?
A. In some states, chemicals in the marijuana plant are used to treat some illnesses or symptoms such as childhood epilepsy and nausea and vomiting associated with cancer treatments. However, the unprocessed marijuana plant is not recognized or approved as medicine by the U.S. Food and Drug Administration. Scientists are continuing to research the use of chemicals found in marijuana. (Tips for Teens: SAMSHA.GOV)

Q. What’s so bad about marijuana? I mean it’s not heroin…
A. Marijuana is not always what it seems. Marijuana can be laced with substances such as PCP, formaldehyde, or codeine cough syrup without your knowledge. “Blunts”—hollowed out cigars filled with marijuana—sometimes have crack cocaine added.
(Tips for Teens: SAMSHA.GOV)

Q. My grandpa smoked pot in the 70’s and he’s ok. What’s so different now?
A. This is not your grandpa’s pot. While marijuana has never been a “healthy” drug, the marijuana smoked today is far more pure and thus more potent than it was then. An average of 4% potency was common in the 80’s. Today’s weed is averaging 20% potency with some values close to 30%-increasing health risks and addiction. (American Chemical Society (ACS), Charas Scientific Lab)

• There can be contaminants in marijuana. Some Colorado producers submitted samples for voluntary testing (testing for contamination is not currently required in Colorado. Fungus, bacteria or traces of heavy metals were found in some plants. Previous testing at another Colorado lab, reported by CBS News in 2015, found mold, mildew, E. Coli and salmonella in some marijuana.

• Marijuana affects your coordination and reaction time, raising your risk of injury or death from car crashes and other accidents.

• Most teens aren’t smoking marijuana. According to the 2014 Monitoring the Future Survey, five out of six 12-17-year-olds have never even tried marijuana.

• It is illegal to buy or sell marijuana according to federal law. In most states, holding even small amounts of marijuana can lead to fines or arrest.

Medical Marijuana
Some research suggests that marijuana may have the potential to help treat some health conditions including pain, nausea, epilepsy, and others. To date there has not been enough research done on the subject, and patients across the country are using marijuana strains and extracts that haven’t been fully tested or shown to be effective for their medical condition.

So far, 25 states and D.C. have passed laws to let people use medical marijuana with recommendations from their doctors. The federal government has decided not to challenge those laws to any great extent. But people who buy marijuana in a state where it’s legal (for medicinal or recreational use) cannot take it across state lines into a state where it is not legal. So it remains a confusing issue.

Marijuana hasn’t been approved by the Food and Drug Administration (FDA), and that approval is necessary to grow and sell medicine in this country. But researchers are studying possible medical uses for marijuana and some of the chemicals it contains. The Drug Enforcement Administration (DEA), which enforces marijuana laws in the U.S., recently said it would increase the number of places allowed to grow the plant for research purposes in hopes of making it easier for more scientists to study marijuana.

Nothing in the law has changed for teens; using weed to get high is still illegal, wherever you live in the U.S. Depending on what scientists learn about marijuana’s value as medicine, it may (or may not) become legal for more people with certain health problems. (National Institute on Drug Abuse) 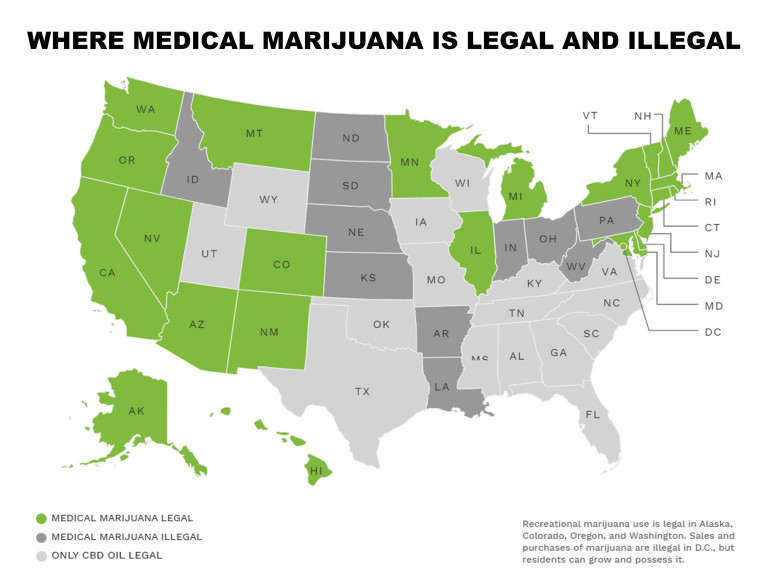 Image from the National Cancer Institute. A map shows the U.S. states and territories that have approved the medical use of cannabis.