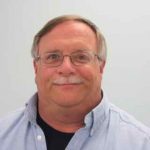 If you sit down and have a conversation with Dann, you will learn that he is a very caring and compassionate person. As the Building Services Manager for the Village of Downers Grove, he has dedicated thirty-seven years in service to the community, all in the shadows. He said that he literally worked his way up from the bottom, starting out as a maintenance guy for the village. After some time, he was moved up into the position of assistant manager where he spent another 10 years taking care of a variety of things around the village. For the past fifteen years, he has served as Building Services Manager and his dedication to his work shines through his positive attitude.

As Dann was growing up, he spent a lot of time with his dad who had the philosophy of, “you broke it, you fix it.” Apparently Dann broke a lot of stuff because he learned to be a “Jack of all Trades” and can pretty much do it all. This is something that he has tried to pass on to his own kids when they were younger. By taking them along with him on occasion when he had repairs to make, they have acquired some of the skills that he gained during his formative years.

I asked Dann what he does when he isn’t working. He got a big smile on his face as he talked about his two grandkids. Being able to spend time with his family and those two grandchildren, they go to places like the zoo or the beach and just have fun.

Dann was very thoughtful when I asked him about one of the best pieces of advice he had ever received. “Don’t sweat the small stuff. Over the years, it seems like a lot of people make too many of their own problems because they make it worse in their head than it ends up being.” I told him that this is advice that many of us should hear on a regular basis.

I then asked Dann what advice he might give to someone who wanted to know how to make the world a better place. This time, he immediately spoke: “Everybody has to be treated with respect. If you do, most of the time, they’ll treat you with respect.” In the ensuing conversation about this piece of advice, I believe that Dann does his best to live by his own advice as often as he can and it is something that I think we all should strive to do in all of our interactions.

Dann, Downers Grove Township and the Village of Downers Grove and it’s residents are so fortunate to have your heart and passion for others. It is an honor to serve with you.

Tagged with: face of DGT