Did You Know? – Downers Grove Township provides a… Board Meeting Agenda – August 3rd, 2017 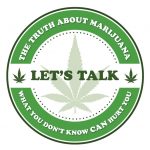 Let’s Talk Parents – More teens tried marijuana for the first time in June and July than any other months of the year.