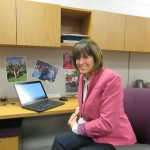 If you want an apt description of a teacher that possesses a drive to provide students with the best possible educational experience, you would be looking at Janet Emond. This extraordinary Social Studies teacher from Downers Grove North is one of those teachers that a student is likely to remember for years beyond graduation.

Janet grew up in Addison and attended Addison Trail High School, later pursuing both her Bachelor and Master’s degrees at Northern Illinois University. When initially attending college, she was a Psychology Major. Because she wanted to be a teacher, she soon realized that perhaps she wouldn’t have much opportunity to teach that subject. That moment of realization would later benefit many future students because she changed her major to History and Political Science and the rest, as they say, is “history”. She began her career at Downers Grove North High School, twenty-six years ago, as a student teacher. She obviously impressed them because she was offered a full-time teaching position and has spent twenty-five years shaping the minds of countless students at DGN. Presently she teaches AP Government, Law, Global Connections and is the Government Club Sponsor.

When I asked Janet about the most satisfying elements of her position, she immediately sighed and said, “There’s so much. So much of it is the little things such as students making a connection to a classroom discussion with something they read or saw in the news. Some of it is bigger like students keeping in touch after they graduate. Some of them pursue careers in these fields of study because of the foundations we’ve laid here.” I asked Janet if she could relate a story about the impact on one of her students. “A student in my Government Club many years ago, attended an event in Chicago where he had an opportunity to meet United States Supreme Court Justice John Paul Stevens. Years later he reached out to say thank you for such an impactful experience. He realized well after the fact, what a unique opportunity that had been.”  What an exciting moment for that student. One can envision how many over Janet’s career she has impacted with her active pursuit of unique and meaningful opportunities for learning. In fact, she is an outstanding partner with Downers Grove Township and its’ Peer Jury Program.

Janet said that she believes Peer Jury is an outstanding program and one that gives her students real life lessons. They learn how to be engaged civically while having a real impact on their community. This is why she is a strong believer and promoter of the opportunity with her students. She knows they have a lot to contribute and to learn and she believes both will occur from their participation.   Knowing her passion for teaching, I asked Janet what piece of advice she would give to students on how to make the world a better place: “Whatever you do, do your best and always give 100%. You don’t want any regrets. As we get older and deal with life’s challenges, take risks and stand up for what you believe in.”

Janet, the Township is so proud of the collaboration that we’ve shared with you for over a decade. You are a wonderful example to your students and they know how much you care. Your dedication has had a positive ripple effect in the Township. We are grateful for our partnership and look forward to many more years of working hand in hand to make our communities places we are all proud to call home.

Tagged with: face of DGT